Once the whole family is ‚in da house‘, there is no way of working on the blog. Moreover, I refrain from taking overly precise tasting notes at the family lunch/dinner table. So most of this comes from my memory of emptied bottles during the festivity.

We started out with two sparkling wines from the Prosecco area (Conegliano/Valdobbiadene) and wider Venetia which come in very fancy outfits. These wines were:

Comment: I couldn’t find the vintage on the bottle, only the information about the 2010 lot on the back label. Anyway, this Venetian sparkling Rosato is a strawberry and raspberry-driven little charmer with freshness and good moussage and no yeasty notes. Later you find peaches, melon, lychee and other fruits in the uncomplicated mix. A great aperitif with a lasting structure, not really complex stuff, but simply joyful and well-done.

As new guests kept pouring in, we opened a second wine from Ettore Ceschin:

Comment: Same vintage guessing like above, only the lot number says 2010. However, this is convincing Prosecco. Not as dry as the label suggests, this is wonderfully fresh and fruity. I like it as much as the Mionetto bottlings.

Then lunch (game in port) required a mature Bordeaux on the lighter side which made me go for Saint Emilion:

Comment: Very typical for its soil and just at its peak. Brighter berries lead the way of this autumn-like wine with leafy notes, game, forest floor, leather and pencil shavings. The backbone is still intact. It fitted the game really well and revealed secondary and tertiary aromas in amazing complexity.

We had killed these bottles and a liqueur from my mother-in-law, who produces the Wallner-Gewekin Liqueurs, when neighbours arrived to congratulate at coffee time. As we still were in a bubbly mood and had apple crumble, we opened a lifestyle / fun-oriented sparkler, a cider from South Tyrolia, while my daughter opened the first birthday presents of her life (and prefering to play with the wrapping paper instead of the actual present):

Comment: What can I say? This in not a mind-boggling elixir, but it is incredibly refreshing and slightly sour apple cider – good now, even better in summer. The apples stem from a Grand Cru mountain site of the Southern Dolomites at 900 meters a.s.l. and express also some flowery notes at a great balance. There are not many better ways of having apples!

For dinner, we had one big course and three wines ( I am on a diet, but no one cared – so I would have to play more sports this week). The plates were filled with cold beef breast in a vinaigrette and little onions, pickles, eggs etc. as toppings, one of mom’s recipes. This went well with a Pinot Noir or a Riesling:

Comment: This Goldquadrat Riesling comes from a rising winemaker team consisting of husband and wife – who wears the pants here considering the name 😉 . They are growing fast and get well known around the scene step by step. This wine sourced from old vines isn’t very concentrated but shows good minerality and some natural sweetness that simply fits. Honey, white peach, bright fruits and reminiscenses of Alsacian Riesling hit the mid-palate at good balance. Very quaffable.

The dish worked with the Mosel-Riesling, but it was elevated into a higher class by the Pinot Noir / Spätburgunder from a guest:

Comment: This modern German Spätburgunder had nice notes of strawberry, raspberry and grapes, it was really fresh with nice acidity and quite some terroir. The wine was good but the combination was great.

For the later evening with conversation and leisure I chose a heavy wine that can mature very well, a Sagrantino di Montefalco, the top wine from that region made from the Sagrantino grape. This Umbrian area also produces cheaper wines named Rosso di Montefalco (mostly Sangiovese, some Sagrantino and other varietals) which are excellent for a low price. Try one if you can. Anyway we had this one from the amazing 1997 vintage in Tuscany and Umbria:

Comment: Ruby-red, dry, with a lot of grip — still young with a strong tannic and acidic backbone. I should have waited even longer but it already drinks nice. I was getting leather, wet dog, herbs (thyme, rosemary and oregano), soft smoke of toasted oak, pencil shavings, dark fruits (blackberry, maraschino cherry), balsamico vinegar, dark chocolate and almonds. A real complex biggie! This Sagrantino will open up and soften out in five to ten years, I suppose – then it will be heavenly.

We finished the wonderful day with a miniature of Carlos I. Brandy (ca. 2010), of which I adore older versions from the 1970ies. The new bottling is still nice but not as deep and complex. I would go for 86 points. 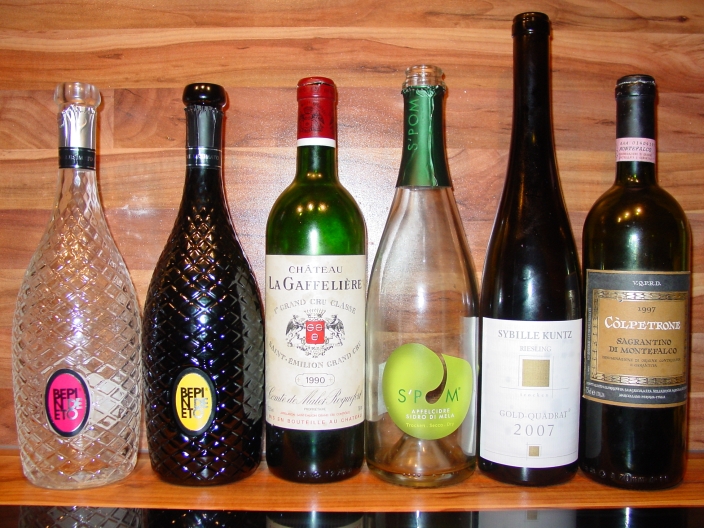 Tomorrow I am going to continue catching up with notes. Included will be some rums, whiskies, liqueurs and Alsacian wines.