Comment: This one has not been talked about recently. Of course it is winey (albeit not sweet or Port-like), but also very elegant and typical for a 1980ies Bowmore with a lot of distillery character (leafy, ferny, lilac, herbal as hell, in fact, and: chlorine – yeah, yeah, some hate this style – discrete peat and pepper spice) and the Bowmore-esque balance. The taste is identically typical, which is good or bad news, depending on your view on this period of Bowmore distillation. I like it. But it will definitely split the opinions. The 56% abv. are not evident. Nice dram, but no ‘must-have’. 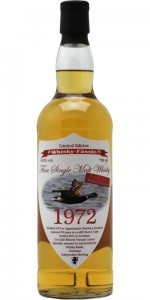 This summer dram is mainly built on four pillars: 1) tropical fruit (apricots, banana, lemon, kiwi, grapefruit, passionfruit), 2) charcoaled white oak and the spiciness/vanilla going with that, 3) honey, and 4) a field of flowers with honeybees, pollen and discrete herbs. That is quite something already. On the side, there are aromas of fine Earl Grey tea, white chocolate, peanuts and a bit of smoke. It reminds me of a fine sweet wine from Italy in some moments (a Vin Santo or a South Tyrolean Passito). The whole combo is surprisingly fresh and alive for such an age, but also a bit oaky. Like with many other Whisky-Fässle-bottlings, the Sherry influence is rather low here. Fino? Third-fill? Whatever, utterly awesome whisky! If the oak had a slightly smaller role this would be legendary!