This statement about the sale was given on a facebook/Google blog by Mark Reynier (Managing Director of Bruichladdich) himself. Some points of concern are the words ‚double the production‘ and the fact that Mark – who had so many inspring ideas for Laddie – has to leave the company – you can hear his regret in his final words a lot. But please judge for yourself, here are Mark’s words:

„The deal has been signed for Rémy to buy Bruichladdich for £58m, the highest price ever paid for a single Scottish malt whisky distillery. 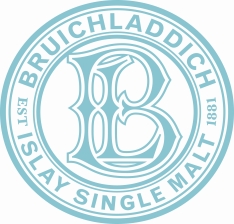 I am conscious that, for legal reasons, there has had to be a dearth of information surrounding this news, and in that vacuum some strange stories have been circulating. Here’s my explanation of the recent turn of events.

Bruichladdich was the first to be bought out of industry ownership and reopened as a private, operating, single malt distillery. It cost £6.5m in December 2000.

Banks were not accustomed to an individual wanting to buy a distillery. Disitlleries were, after all, the reserve of conglomerates and cartels. This hare-brained idea was turned down, out of hand, by every bank except one. And it took eleven months to get them signed up.

To have a chance to develop Bruichladdich along the lines I had in mind, time was essential. Private equity would be needed – and lots of it. 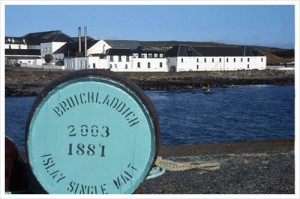 Still the Coast of Heaven?

Finding equity investors was not so difficult, and knowing that the stocks of maturing Bruichladdich could be borrowed against, I knew how much equity investment it would take. At least I thought so.

Venture capital, corporate investors, or other sources of money would not be appropriate for the length of timeI had in mind. And any public subsidy or grants for such a project were, at that time, prohibited.

Consequently, I chose a number of ‘sophisticated investors’, those for whom £100k was not their whole retirement nest egg, and to whom I could go to for more if it was necessary; and it was.

The investors were people I already knew through my wine business, were recommended, or were solicited from Islay. This meant a larger group of shareholders than usual for such a private venture. But it meant the company would not be beholden to any one person or interest; and any single shareholder could sell up without endangering the rest of the project. With specific articles of association, no one could sell their shares to a third party before offering them to existing shareholders, securing the ‘back door’ from unwanted attention.

To provide guidance, I chose as non-executive directors a businessman, an entrepreneur, an accountant, and as chairman, a baronet. This diverse mix of skills provided the advice, the checks and balance, the support – above and beyond the call – that has been essential, and with out which this project would surely have foundered. The one field they weren’t experienced in, was brand building, and this would lead to continual friction. 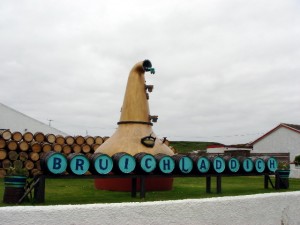 Clouds over the Laddie?

To run the business, as executive directors, this iconoclast chose a distiller, a manager, and a salesman. As it turned out over the decade, we went through three of the latter – a playboy, a grinder and a real pro. These guys have given their all, slogged away through tough, times and dark days. At times it was frustratingly turgid, at others breathtakingly fluid, at all times it has been intense, but together we have wrestled and dragged this business along to where we are today.

With 60 shareholders we were obliged by the chairman to run Bruichladdich as a mini-public company. This great discipline, while tedious at first, rapidly became an indispensable benefit.

Around three offers to buy the business a year are received – mostly ridiculous, opportunistic cranky ones from overseas. These are easily vetted and discarded. Occasionally a more serious one comes in and then we are duty bound, on behalf of the shareholders, to give it due consideration, and then dismiss it. We had one of those from William Grant.

In 2008 the board decided that 2014 would be the crossroads for Bruichladdich. Stocks would be plentiful, sales would beat our maximum, the brand architecture established, the brand well developed. We would then have three options: float the company, sell it, or ‘stick’.

As forecast, the company’s healthy profits more or less plateaued between 2009 and 2011 as firstly, the company moved from smaller volumes of limited edition, older stocks to larger volumes of younger, own-distilled whiskies; and secondly, substantial investments were made in administrative systems, new spirit and the brand (as well as a couple of extraordinary items in 2011) as we developed, financed and positioned Bruichladdich for the imminent growth spurt. 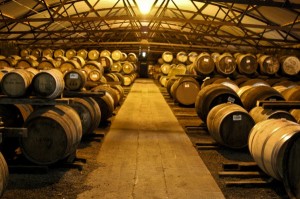 Laddie Casks - owned by only one instead of 60 shareholders now

With our own mature stocks finally coming on line, Bruichladdich has now entered the long-anticipated period of turbo-growth, from 2012 to 2014, with sales doubling to around 100k cases. This rapid growth was predicted in our original business plan, though I must admit, a year or two later than envisaged. Sales growth for the first six months of 2012 was 60% over 2011, profits for the year are expected to show an impressive increase. Rémy know exactly what they are paying for.

However, with any rapidly developing company there comes a time when larger capital sums are needed to finance greater growth, and for us that point would come towards 2014.

Our shareholders have been a content bunch. Even though we had never paid a dividend (all our profits being re-invested in the business) they have been pleased to be associated with such a successful brand and its ethos. Despite subscribing to a five year investment, rather than a twelve year one, none had ever asked to sell up. Instead, there has been only total support and encouragement.

Having only re-affirmed our 2014 denouement strategy at a January 2012 board meeting, along came Rémy. We discussed their initial ‘name your price’ approach in a board meeting in March. There were exhortations of freedom worthy of Braveheart and rousing expressions of defiance from my fellow non executive directors: if Rémy were serious, they’ll need to pay dear!

I guess they were serious. For at a board meeting a month later, convened expressly to consider the indicative offer the chairman had received, Braveheart was now nowhere to be seen. The board voted seven to one against me to accept the offer. 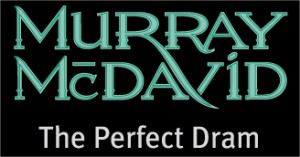 There were, I believe, a number of influencing factors such as health, wealth and happiness. Perhaps in a less volatile economic environment my fellow directors may have taken a different view to this albeit generous and opportune bird in the hand…

With the chairman recommending the deal to shareholders who would receive an eye-watering seven times the initial share price (eleven times, if one takes investment tax relief in to account) and a multiple of earnings of 35, the highest ever for the whisky industry, acceptance by the necessary 60% – though with genuine expressions of regret – was a foregone conclusion.

Rémy, though a quoted company, is still directed by three members of the Hériard Dubreuil family and their CEO Jean-Marie Laborde. Having met the family and his team several times, it is clear that they are on a mission to create an impressive, uber-premium, spirit-orientated business.

They are a dynamic bunch of guys who clearly understand and value what we have built up here at Bruichladdich. Indeed, it was no chance encounter; they have been following our progress closely since 2007. When it came to it they were prepared to dig deep to get hold of Bruichladdich. They wanted Bruichladdich because it is Bruichladdich, not a cheaper, blandola Glen McSporran. For that we should be very flattered.

Rémy have the resources to double production (creating more jobs) to take Bruichladdich, via their own distribution channels, to a level and an audience that we could only dream of. Rémy are taking the long view. A very long view. And that can only be a good and admirable thing.

I always knew the right suitor for Bruichladdich would come from outside the whisky industry, a company that would truly value what we have laboriously built up: even if I had written the specification myself, Rémy could not be a more suitable candidate. I feel confident that Bruichladdich will very much be in the right hands. 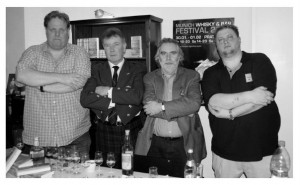 .. when it was still fun for Jim

There is a feeling of unfinished business, that 2014 denouement. Could we have provided liquidity to shareholders and raised that extra capital from a flotation on a secondary exchange such as AIM? Or, could we have merely ‘stuck’, stayed put at 100k cases and rewarded shareholders with dividends? Bruichladdich, after all, has evolved into a rather unique type of company.

As with other Rémy businesses, Bruichladdich will continue to be a stand-alone company, operated from Islay, with Islay maturation and Islay bottling; having paid such a hefty price for Bruichladdich, the last thing the new owners are going to do is un-bruichladdich Bruichladdich.

Simon Coughlin will continue to run the show as he has done so effectively, while Jim, though he says he will retire in June 2013, I have no doubt will continue, at the very least, with his black art. In essence, Bruichladdich has merely exchanged 60 small shareholders for one bigger one. Bruichladdich will carry on as before. 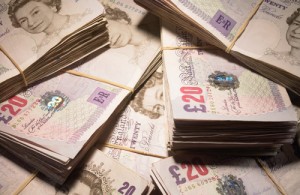 Can you hear it talk?

And me? For a while, I had planned to be spending more time in Edinburgh as my son starts school there soon. When the deal is completed in three weeks or so (the speed of the transaction being a testament to the systems and that pesky public company level of information) I will leave the company, my role no longer existing, my job at an end. I may chose to continue with Bruichladdich in some form or other – we’ll see when the dust settles.

Who knows? Perhaps there’s a new adventure out there somewhere, waiting to be discovered. But it could never be quite like this one.“