When it comes to vehicles, who wouldn’t like to ride in style: like one of those old Ducati or an exciting vintage Ferrari. Old vehicles, well, actually everything from the old days has more soul than today’s equivalent, that is a given – but the old magic is less practical on the other hand, often even being a rare luxury. Or would you want to commute in the car/motorbike mentioned on a daily basis (considering fuel, reliability, performance, safety, etc.)? 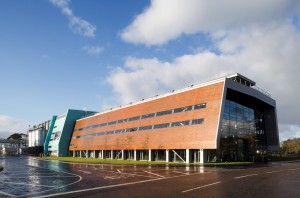 idea can be transferred to DIAGEO’s new Speyside distillery Roseisle, which became necessary due to the world’s rising demand for whisky (the company even plans to build another biggie soon). In above’s analogy, it is your Porsche Cayenne (but way more energy efficient): great performance, reliability and control in a practical manner. This is the future in distillation, if you like it or not. 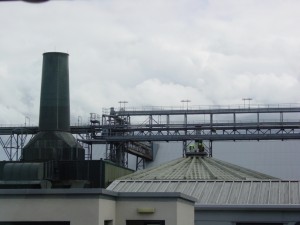 A Part of Roseisle's Maltings

The Roseisle complex (3.000 sq metre, 10-12 million litres output per annum possible), just outside Elgin, has been Scotland’s most ambitious and controversial distillery project since thirty years – at a price point of roughly 40 million quid (pounds). The goal was not to replace any other distillery but to have a 10% rise in DIAGEO’s malt portfolio with the ability to distill two (actually three) distinct Speyside whisky styles there: light and grassy as well as a more heavy one (on occasion). This diversity can be achieved mostly by variable condensing technology (details on request). However, Roseisle allows for more tweaking if it became necessary. 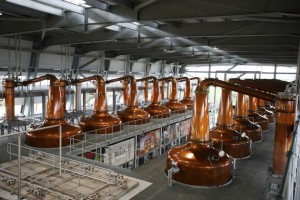 By now the first Roseisle whiskies are over three years old and turn out to be very promising (review of the nice new make coming soon). The owners said that they were very pleased with the outcome. According to Douglas Murray (Process and Liquid Development Manager) and Brian Higgs (Malt Distilling Director), there is always room for the unexpected in building a new distillery with an exact style of whisky in mind – even with tons of experience. Negative surprises have occured in other new places before, but aside from small bugs, Roseisle fulfilled all wishes of its designers so far. 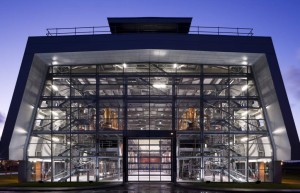 It might not be a very romantic distillery but Roseisle is a product of our time: 14 stills, state-of-the-art technical equipment, maltings on site, all highly energy- and cost efficient (very green, yes! Way less CO2 emission, etc.), industrial and very safe. I only found it scary for some minutes (sharing my colleagues thought of a „soulless distillation machine“), but then I became more and more impressed with the place – and came to the conclusion that it simply has a different, a modern soul. 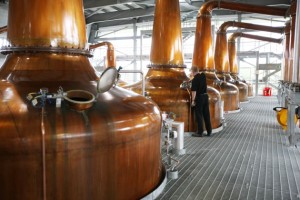 Many comparisons were made between pistons of sports cars and the stills there – for a good reason as you can see in the pictures. Every detail is up-to-date and well-planned, designed to create a great spirit on a global scale. And this paves the way into the future. Kilchoman, as nice as it may be for us enthusiasts, certainly doesn’t (cf. Whisky Magazine 91)?

Of course, Roseisle spirit will mostly go into DIAGEO’s blends, as these still make up the lion’s share (around 94% ) of whisky sales. But there is going to be a Roseisle Single Malt one day. It is too early to tell in which style those bottlings are going to be, heavy, light, or a mix of both, Dr. Jim Beveridge said (Master Blender).

Does Roseisle pose a threat to the other distilleries? If no major slump in demand for whisky occurs the opposite will be the case. DIAGEO can bottle more whisky as Single Malt from their other 27 distilleries than they could before because of Roseisle’s huge output (which isn’t much bigger than at Glenfiddich, by the way). And that is great news. In 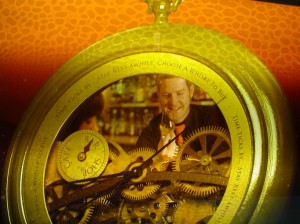 today’s whisky world there is room for a distillery like Roseisle on the one end and for Bruichladdich on the other. Let’s embrace this diversity. Modernism becomes tradition with time.

Here are some transparencies from a presentation about Roseisle which I could photograph that explain the production process in more detail. Thanks to DIAGEO’s own Nick, Brian, Pat and Duncan for this generous insight and parts of the information given here. 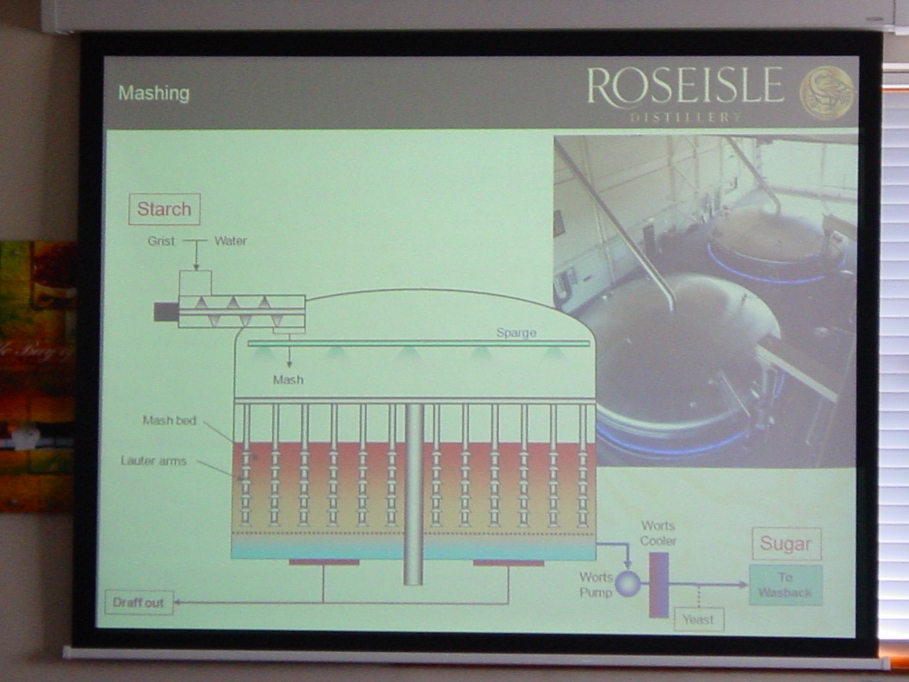 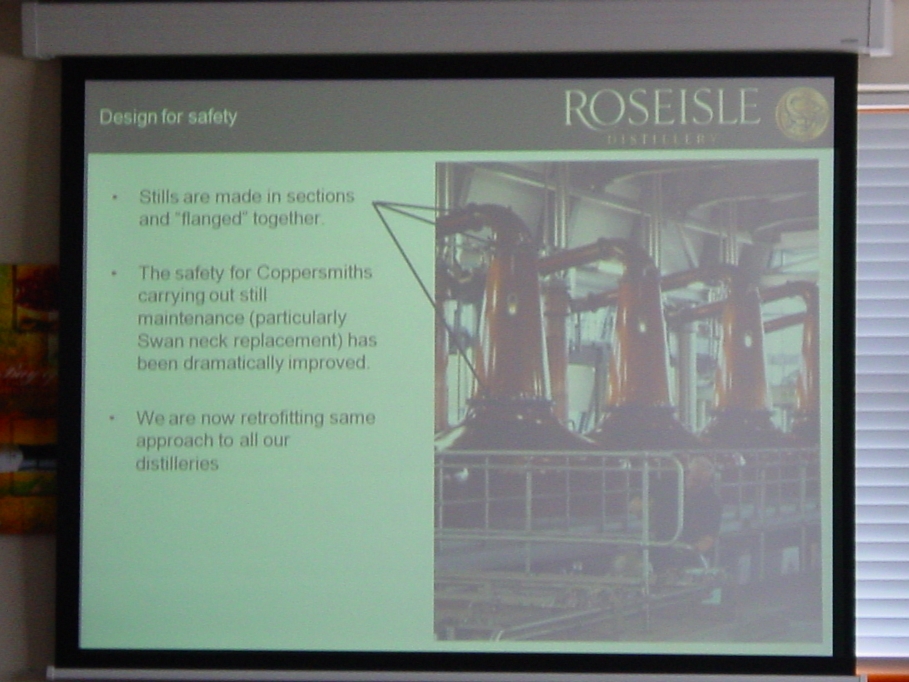 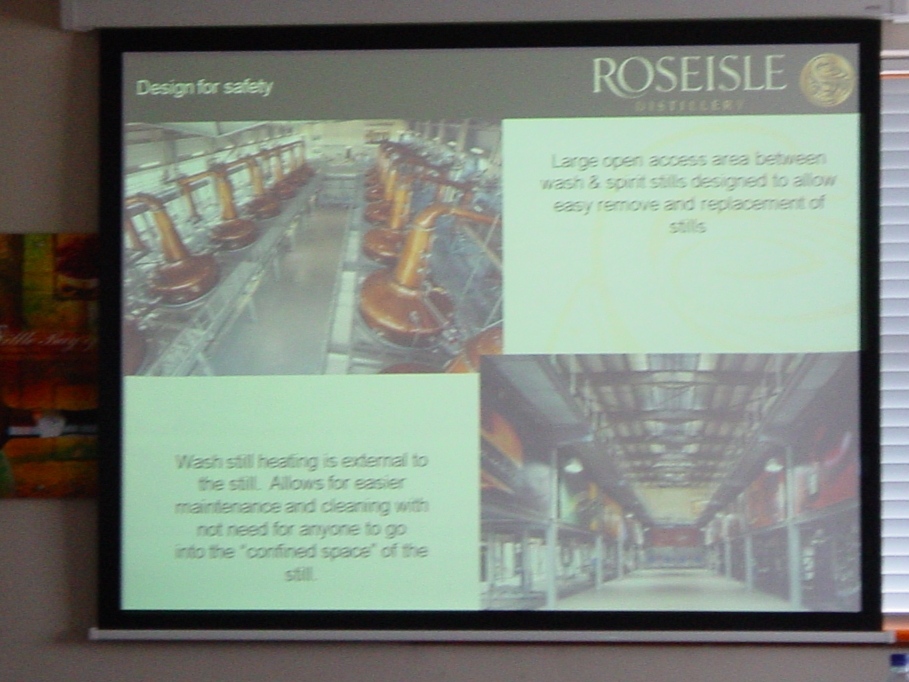 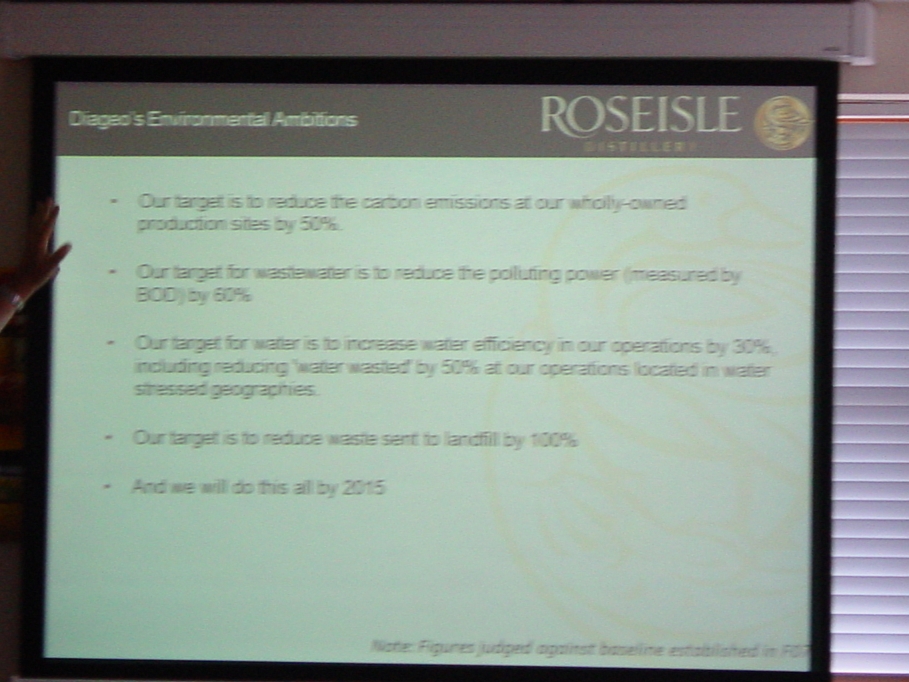 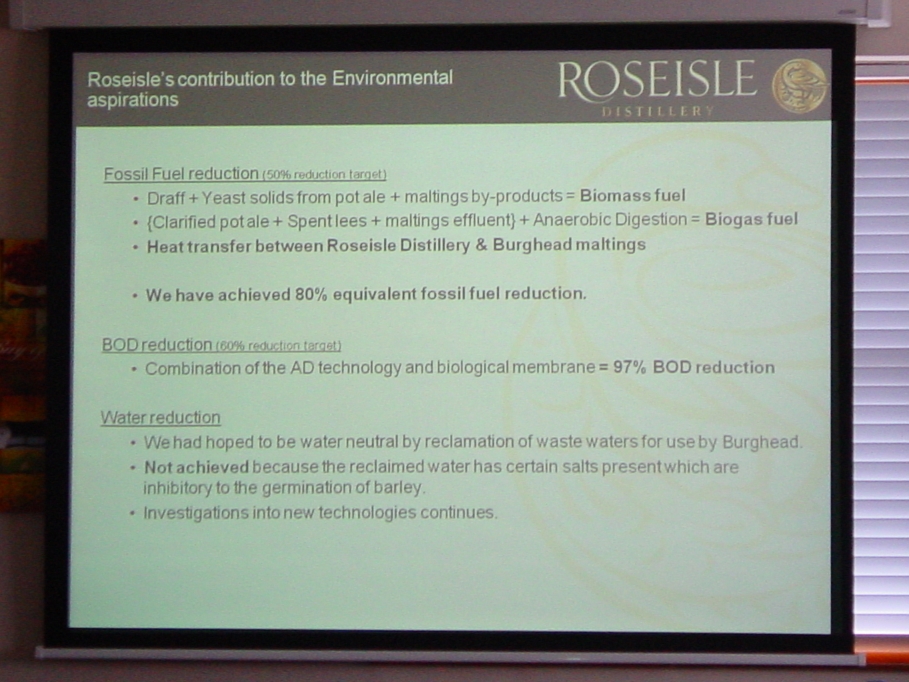 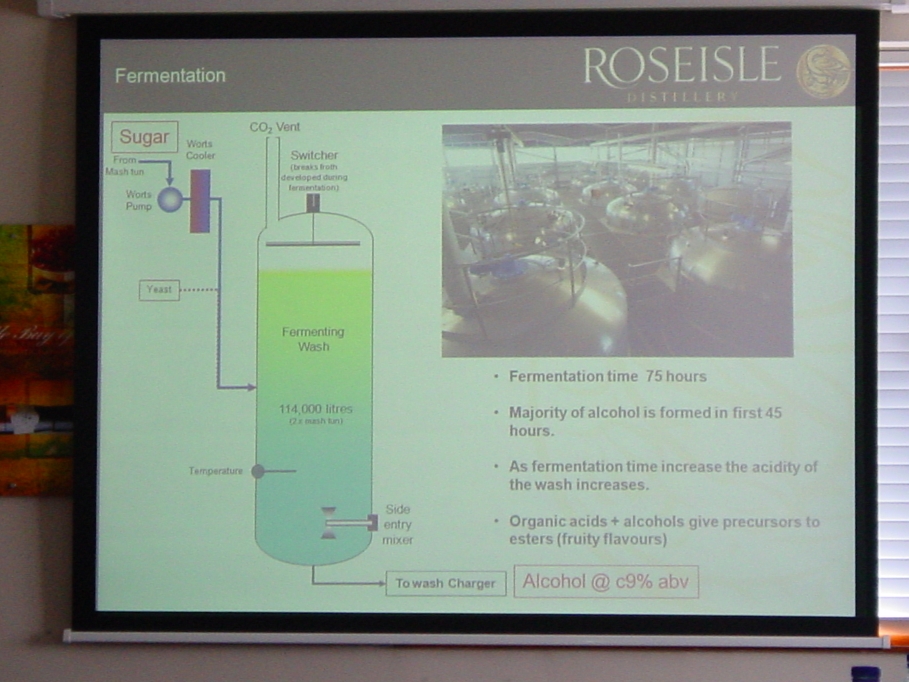