Let’s announce the winner and a runner-up of the Regensburger Whisky Walk-Tasting 2011: Short notes only as these were tasted ‚on tour‘ under stress.

Before I poured this one, I told the crowd to drink and buy more Auchentoshan as it is heavily underrated in my eyes. My words earned pathetic smiles among some Islay-Fans, others chimed in by mentioning that the Three Wood was an excellent daily dram and that they had had great single casks from this triple-distilling Lowland Distillery before. I was really surprised – and happy – that at the final count, this bottling clearly won and even convinced the peatheads. Here are the impressions:

Perfect fruitbasket (regional fall fruit and exotic one behind it – yes, all of them!) with a reminiscence of Bruichladdich 1970 because of its sourly fresh character with grapefruit and passion fruit (good comment, Flo!). We have more flowers in this one, and of course, less coastal notes than in the Laddie. It is beautifully balanced. Creme Brulee, mahogani and white oak wood, goarse, mild chili and baked apples with cinnamon and what not…crazy. It delivers fully on the palate and in the finish yet remains light somehow. No water is needed because it is smooth at maximum delivery. Holy …!

Legendary Bottler, great distillery, unusual age. What can go wrong but the price tag with this one? It is extremely rare and I have only seen it at three occasions. Let’s see if Silvano picked another stunner:

at first, we get fresh forest, old-style Sherry, mushrooms, horse sweat and a hot spiciness (chili, pepper, ginger). Later, complexity defines itself and makes this dram absolutely unique – I have never had such a combo: hazelnuts, sawmill, roots, Stilton Blue Cheese, espresso and berry notes emerge, accompanied by the smell of a classy Chesterfield Couch and wild boar stew with white beans in Barolo. All this is powerful and dark and could pass as a high end rum, too – on the well-balanced palate and in the long finish, that renders a bitterness of Sicilian-roasted coffee and high-end chocolate -. However, this needs time to be discovered – and maybe (not necessarily) some water, which brings a bit more roundness to the crazy carousel ride. Outstanding (in the orginal meaning of this word as well)! 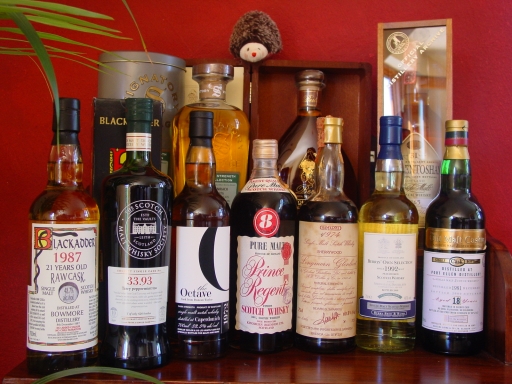 All Bottlings of that Memorable Night