This Skye-born dram is one of the  true Single Malts with a unique profile that rarely fails to impress connoisseurs. However, I think it needs 9-10 years to age to reach this quality. Don’t judge it by younger versions like the ’57 degrees North‘. The much better 10 y.o. is an all-time favourite, and older versions have a different charm which is more on complexity than on bite. Today, I am reviewing two nice specimen from the older days, namely 1974 and 1955:

Comment: This rare baby is surprisingly powerful at 43% with a cherry-like sherry influence, gunpowder sulphur and loads of plums. Altogether a smaller version of the BBR Talisker 1972 – really good and unique with quite some spiciness. 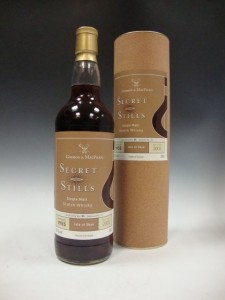 Comment: Deep dark plummy notes (jam of ripe dark fruits), peppery spice, brooding but also balanced at the same time, mainly on maraschino cherry, coal and red dark grapes. Polished mahogani and a maritime character join the complex nose right from the start. However, it keeps changing, now we have ginger bread, milk chocolate cookie, even vanilla and toffee in the foreground. This legend tastes much smoother than expected, high class without too much of a chili catch. It goes on with whiffs of humidor, coffee, matches and christmas cake. The grand finale is ultralong on great sherry and coal dust, gunpowder-sulphur and dark fruit.