Exciting – a whole lotta new samples reached home, and as the Islay drams usually are sold out first, let’s get started with three Bowmore and one Port Ellen.

Vegetal and flowery like a young Rhum Agricole at first, also leather in the beginning, but don’t be fooled. It soon becomes a true South Coast Ileach! Great balance – the leathery aroma builds a bridge between the two elements mentioned. The downside: altogether a bit subdued, also on the palate with a leather-spice-finish. Start talking to me, sweetheart… . Here is some water to open up: still no change, but more drinkable. One for patient guys, the silent type.

Maritime and fresh at first (salt), also big notes of white wine (a mix of barrel-fermented Chardonnay and Sauvignon Blanc from New Zealand with the fruitiness and berries coming along with those) and creamy vanilla. Then herbs and ferns come into focus. The Islay character is there but more in the background. The complexity translates into the palate with berries, fruit, herbs, tea, spice and peat. Not only ducks will love this. 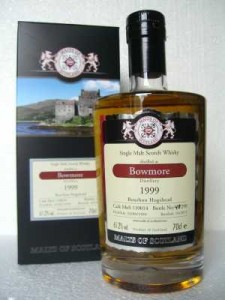 armyardy at first, then it becomes more South Coast Islay on coal, smoke, pepper and peat. Also dark wet wood and the typical ferns emerge. Later short bread, honey, orange jam and liqueur make a nice afternoon dram – on a farm, that is. It finishes on sulphur, flints and peat.

: Big intense spice nose that has everything that makes Port Ellen such a gem nowadays. This one is right in the middle of all possible PE profiles. Some maritime dirtiness, sea spray and brine, herbs, oil, ropes, peppery and chili-esque spice, leather, the wonderful crispy maltiness (like salted crisps), camphor, discrete mint, peat smoke, but also fruit (apricots and green bananas) and vanilla provide for immense complexity that dances on a tightrope between the poles of balance und untamed roughness. Hooorraayy, it delivers on the palate as well and becomes more peaty! A crazy Port Ellen that adds iodine, coal smoke, hay and matchstick sulphur to the mindboggling mix from above and never really finishes. Yet it is very quaffable and screams for a second glass – which I just poured. Awesome!