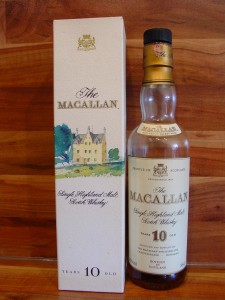 A Bottle within a Long Line of Legendary History

This series of Macallan (golden round age indication, see photo) was running for quite a long time (until around 2002). There were earlier versions with screw caps and 75cl and later ones like this which have a cork stopper and date back to presumably the late 1980ies in distillation. To put this bottling into perspective, I also have to mention the 10 y.o. at cask strength (red stripe) with 75cl (earlier) and its 70cl heir (diagonal stripe, same time) which were mind-blowing whiskies. I can also recommend the 8 y.o.

versions from this series with a plastic or screw cap: all wonderful sippers. So I am keen on trying this expression which is still reasonably priced.

With Macallan in general, one can say: the older, the better (exceptions exist, this isn’t so easy to simplify), but the styles of Macallan did vary in times. An early 1960 Macallan is quite different from a mid 1960 version, for example – however, the basic distillery character always shines through. Macallan was a primus inter pares for a long time – and deservedly so – many older Macallans are benchmark drams in terms of roundness, sherry integration and finesse. But one should not forget that many other wonderful distillates from other producers weren’t as easily available or yet discovered by the broad public then.

A Very Old Version of this Series (screw cap)

Macallan also is the probably most forged Single Malt (after blends), so beware of fakes. But don’t worry too much, most bottles are ok if you look at them carefully and buy at reliable sources. Unfortunately, some fakes are done very well. But that is another topic screaming for its own articles. Don’t let your love for Macallan be disturbed by some criminals.

Now I am going to review the small 10 y.o. bottling of 35cl distilled in the late 1980ies (according to tax stamp and other hints) today – a youngtimer.

Palate: Round and smooth arrival, sweet and dark. Very complex with the notes from above. I love the back and forth between bitter (orange skin and wood) and sweet (Sherry and malt aromas).

Comment: Quod erat expectatum – as expected this is a quite typical Macallan: smooth, perfect Sherry influence, round and complex with the classic notes, which always are an intiguing mix to experience. How can it be so mature? Maybe not the most powerful monster with primary ‚in-your-face‘-notes, more a highly drinkable whisky of finesse. Also for afternoon coffee 😉 .

P.S.: Soon I will compare it to this one: 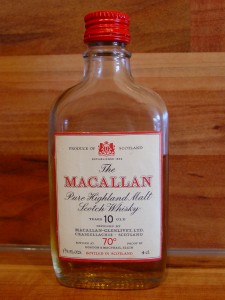