Last weekend I had the honor to hold a tasting (and a little stand) at the second Whiskyfest in Biberach. There was a great atmosphere among guests and exhibitors alike. Rolf and his wife Alexandra were perfect hosts with their team on this small fair.

Host Rolf and me

The tasting-lineup is described in another article here on www.slowdrink.de – when I put it together, I knew that the BenRiach 1970 Pedro Ximinex (sic!), the Glen Grant 1969 Lonach and the Port Ellen 1982 Acorn Sherry Cask would rock people’s worlds because I had tried them before, but the other two bottlings were new to me as well, and on paper and in reviews they didn’t look as if they could keep up the high level of these other whiskies.

How unnecessary my fear was … every dram was above 90 (everybody agreed) after all and the styles were still really different in the line-up. Check out the short notes I could take during moderating. What a night!

Short Note: Perfectly balanced, already some ‚old bottle flavour‘ with library smells and wet cardboard, the Sherry is well integrated, the oak is not overboarding (I disagree with Serge here) and rather dark (mahogani). This complex dram is more on dark things in general (fruit, honey, liquorice, etc.), a gentleman in a dark coat. It is very drinkable and quite a masterpiece with understatement.

Short Note: I knew this one from the blind tastings in the Malt Maniac Awards 2009 and immediately bought it after the revelation. Great intensity of ripe autumn fruits and berries, wonderful Bourbon Cask aromas, as mature as it can get without becoming too woody. People liked this even more than the Highland Park.

Short Note: This one defies belief, it has everything you look for in a whisky: from bright to dark fruit, spice, berries, etc. in perfect balance and strong on the mid-palate with the finest of Sherry – holy cow! What a stunner! Among the best I had this year. The only shortcoming is that there could be a little more complexity. People drooled after this one and said it was probably the best dram they had in a long time. Consequently, the remainders of the bottle were gone at the speed of light once the word spread. The question then was: What to drink after this?

Short Note: This comes from the last year in which Glen Ord used their own malting floor. People expected this to be the weakest dram and a rapid drop in quality (Ord has no high standing within the scene), but at Glen Ord they used to make fine drams in the past and this one is no exception. Really complex and powerful. It departs from the predecessors in style with its intense maltiness, apple, fruit, white pepper, flowers, heather and honey. A real good whisky.

Short Note: What can be said about this dirty Islay beauty in sweet dark Sherry that finished our session? It is typical for the distillery and – despite maybe not being the most comlex – one of the tastiest and most supple versions of PE out there. Give this one some time and it will reward you.

It is quite rare that you get so lucky with a tasting range. Again, it was about finding out for yourself, because on paper and in previous reviews, some of these treasures didn’t look so appealing.

All participants won’t forget the magic of this wonderful night in a nice small round of knowledgeable connoisseurs soon, I hope – I won’t. Such events are what Slowdrink.de is all about – liquid memories! 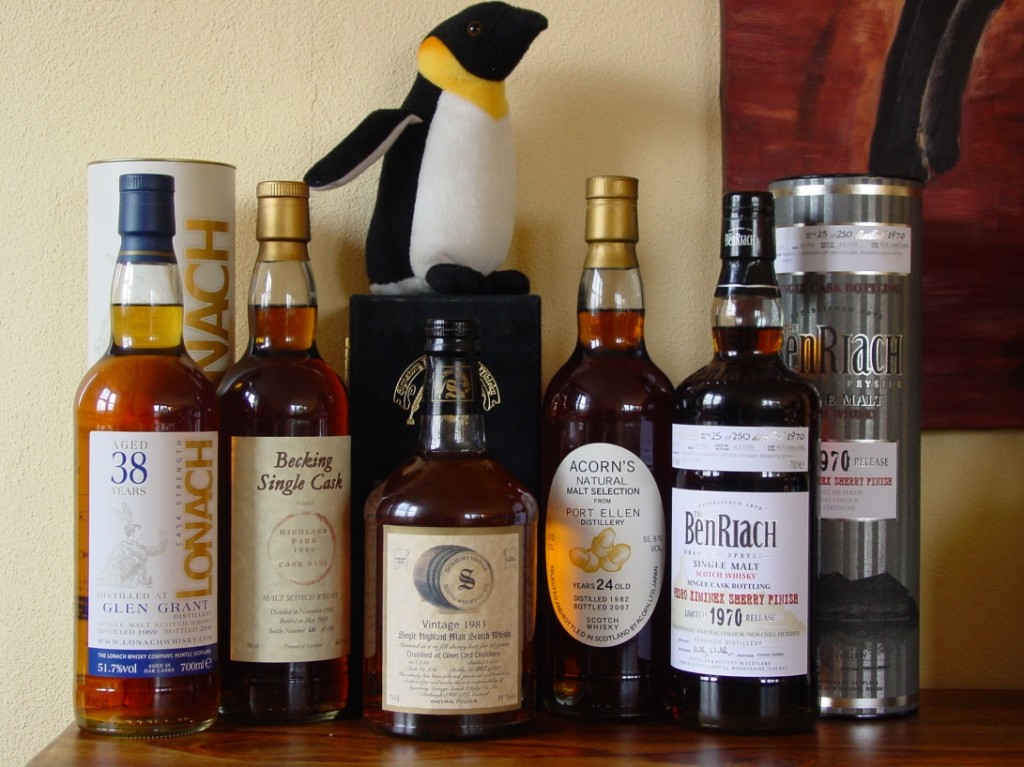