drams received a lot of attention recently. The Old Pulteney 21 y.o. was named ‚World’s Greatest Whisky 2012‘ by Jim Murray with 97.5 points in his annual release Whisky Bible, a choice many people joked about, and the Ardbeg 1991 – 2011 Malts of Scotland for Hotel Bero from an extremely dark Sherry Cask 11003, 48,8%, started fiercly held debates in several forums because a) of its color and b) you can only get a bottle if you stay over night at Hotel Bero in Belgium (well, at least no other duties like kissing Geert Bero’s ugly cousin or dancing in lingerie on a pole were involved there, so what is all the fuss about?

It’s a real cool place to stay with great cuisine, you Ardbeg nuts! By the way: excellent marketing, Geert! I like this creation of hype).

Let’s take a look behind the chitter-chatter and only judge quality:

pepper, a lot of vanilla, honey, ripe pears and intense apple compote. It is much less farmyardy than earlier versions, this bottling is clean and fruity-sweet like a first-fill Bourbon-Cask Glenmorangie. Later I am getting milk coffee, whiffs of leather and even more tropical fruits in the sweet malkt. Maybe a tad too nice – like an A+ student.

Palate: Dry at first with dried flowers and heather. Woodier and more gristy (just as I remembered it) than the nose suggested, but overall very fruity and tropically sweet (white oak madness) like above.

Comment: This whisky has become more mainstream. Every note is clean, upfront and present, Bourbon Casks are doing the fruity trick, but spices are missing a bit. This Pulteney is more on the oaky side in general. Where have the stable notes gone? Good whisky, but not the world’s best whisky in this year for me. However, I have no problem with Jim Murray’s decision – taste is individual, in this case VERY individual. Congrats to the producers and thanks to Lucas for the quick shipment of the sample. 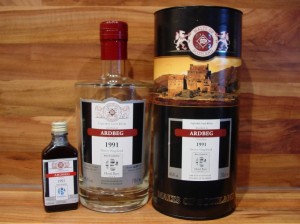 Palate: Liquid ashes,chalk and earthy roots at first, then it displays old medicinical Ardbeg notes, which is extremely good news. Hello beetroot! Resin! Herbs! As dirty and mossy as the Very Old Ardbeg or some 1967s plus my beloved model train trafo burn aroma. Round, not disjointed at all. Wow. 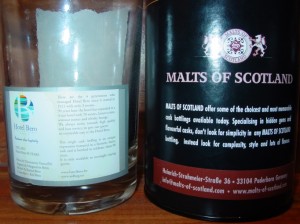 : Extremely long and flinty (gunpowder). Sulphur, ash, peat and iodine in a great combo, tobacco, cocoa powder, pine needles and resin smoke. Just perfectly balanced between bitter and sweet, wonderfully dirty – like clothes and skin after a night at the bonfire.

Comment: Awesome cask choice – and I find it extremely heartwarming that such old-style Ardbegs can still be found (with hints to Port Charlotte). I just wish I knew where! Anybody selling?