How many Allt-a-Bhainne have you tasted so far? Built only in 1975, this distillery was intended to predominantly produce for Chivas blends (like almost all distilleries) and was very rarely bottled as a Single Malt. It isn’t a small one and said to be very efficient, its looks follow function and are quite modern. Between 2002 and 2005 it was mothballed. Although I can’t remember an amazing bottling, I won’t be prejudiced in trying this new release by Malts of Scotland. Exciting and rare stuff, let’s see how it performs: 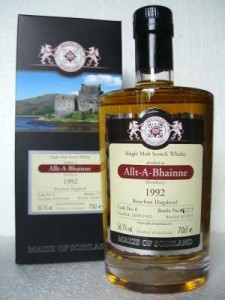 Licorice, malt, heather, ginger and coal dust rule this dram. One can also find vanilla cream, oak, toffee, leafs, honey, pistachio, spinach, spices (white pepper and chili) and fruit (mainly apples but also peach and pineapple) in the nose of this Speysider. It tastes and finishes rather dry on hay, licorice, white pepper, oak and apricot fruit, quite similar to its nose. Water helps a lot by making this Allt-a-Bhainne creamy and less dry with a better balance. Decent, I must say. Not only one to complete your ‚drinking map‘ of Scotland.