Bowmore – Back on Top 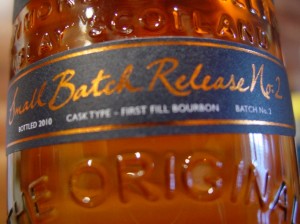 Bowmore Single Malt today, two youngsters, head-to-head. The distillery has regained a good standing among the real Islay fans because the whiskies after 1990 (with 1993 being outstanding but also atypical) have turned more consistent and peaty while having lost the lavender/chlorine offnote some people hated. I have to state that I never had problems with that kind of Bowmore profile, even in the 1980ies – and I have always cherished their distillates over time because of the roundness in character and complexity while being absolutely unique. You surely can tell a Bowmore from other distilleries‘ drams. It is great to see that they managed to regain their ‚terroir‘ after 1994 by also keeping the new steamtrain power notes. Sweet completeness. 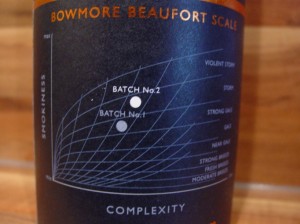 However, what they know about distilling can’t be translated to the fields of science, I guess. Take a close look at this graph, or what they call the Bowmore version of the Beaufort Scale (nice marketing though) printed on the box of the ‚Tempest‘: There is an x-axis for complexity and a y-axis for, well, smokiness AND storm levels (on the right). So smoke equals storm, or what? Or what do the two x-determiners mean. I am lost. Shouldn’t the product of both axes deliver the final result? Drop me a mail if you can explain Bowmore math to me – or the responsible marketing guy’s logic 😉 .

Who cares anyway, let’s get down to what matters most: the whisky inside the bottles: 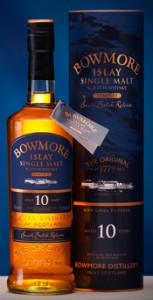 Bourbon Casks make this fruitier and slightly oakier than the Ambassador’s Cask – it is very round and the peat, smoke and spice (white pepper, Chipotle) stand only in the background – but add to the mix. I find vanilla, toffee, Orange Pekoe tea, goarse, lemons, apricots, apples, green bananas and lots of orange marmelade as well. It becomes spicier with time but overall, it remains on the gentle side of peated Islay drams. Late tobacco joins the unusual mix.

Palate: Now we have much more Bowmore typicality, different from what the nose had suggested. I love this profile, it reminds me of the old Mariner, but with more fruit and orange liqueur covered by chocolate (hence sweeter) – without losing the Island traits. It is so round that water would be an insult to it.

Finish: The fruit is equal in weight to softened Islay notes and the Bowmore character. Medium length, definitely shorter than the Ambassador’s Cask. Very easy to drink so that a second dram is desired.

Comment: Clean and fruity style, but still true Bowmore. It is well-priced and a recommendable bottling for those who like the softer elements of Bowmore. Only the name doesn’t fit. I’d call it Bowmore ‚Tropical Depression‘ 😉 . 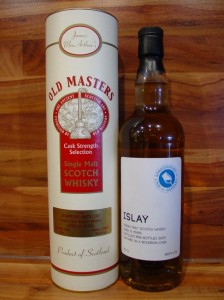 Nose: Less fruity but more spice, a lot of spice (black and white pepper, chili, salt, even juniper like in a Caol Ila) and Islay (maritime freshness, seaspray, peat, smoke, dirty harbour) in here. Intriguing: There is bell pepper (which I love). This should be called Tempest. It clearly shows Bowmore characteristics (more than the Tempest) like ferns, leafs, lilacs, forest floor and ozony chlorine after a while. The only fruit components I can detect are lemon zests and apples. This one sings Iggy Pop’s greatest hit.

Palate: Brine, salt, spice combo, peat, tar, herbs (stinging nettle) and harbour aromas, even old tires and ropes hanging in oily seawater. No water again, but hotter on the palate than the Tempest. 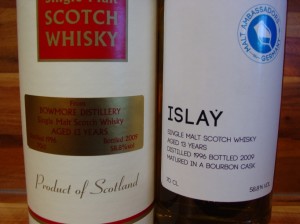 , complex and spicy, slightly flinty later with traces of iodine, a bit like a peppered and salted steak on a steamtrain – and an apple as dessert. This is a true South Coast Islay.

Comment: A very nice bottling, which was relabeled from a James MacArthur release only for the German Malt Ambassadors. If you like your Bowmore spicy and more phenolic, this is your choice. More tempesty than the Tempest. I like!