I felt the need for fruit today (no, not the healthy stuff, the liquid equivalent) – and so I went straight to the sample room and grabbed three Glenglassaughs from the old days. Check out this uber-cristalline head-to-head: 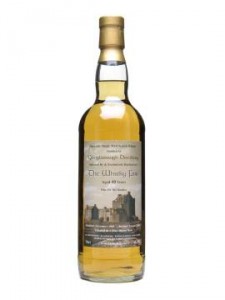 When I received a sample of this one back in 2006, I thought they had a mix-up  at the bottling hall … an old classy Bowmore instead of a Glassa. But my comparisons showed that it was a real Portsoy-distillate. I ordered two bottles right away because I loved it and put one bottle into a tasting. This is now history and the bottle a classic. Let’s revisit: It shows bright dextrose/cristalline fruitiness to the max (somewhat ‚1960-Bowmore-esque‘ as I said) and is very clean. The wood is there, but not in front. I also get berries, lots of cassis, white peach, passion fruit, orange liqueur, grapefruit, pineapple, gooseberry and kiwi – wow. Later, mild white pepper notes avoid an overall kitschiness. Oh my God, this goes on and on – a load of apricot jam on a pancake, even some maple syrup and a little natural caramel. Needless to say, it posesses a perfect balance with more vanilla and a malty edge in the mouth – and with enough strength despite such a bright profile. I love the discrete Fino Sherry influence in this, like in so many old malts. However, some might call it a bit boring after some time – I don’t. 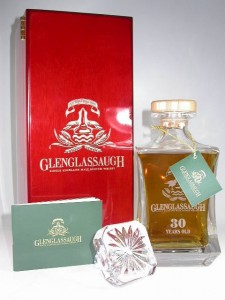 This one was older than its decanter suggested and is the most sour of the three. Bright and dark elements, mainly fruit and cookies hit the nose. Some sherry elements are clearly there, quite well integrated and high class, but not overwhelming, they let all the brighter elements exist as well. Then we have baked apples, lime, gooseberries, raising dough, raisin bread, mahogani wood, candy floss, musk, fresh male sweat and tomato straw. Overall, it holds back more than the others and is unusual in some moments. What is this sour element somewhere in the back? It is not as powerful as the others but a great dram nonetheless. 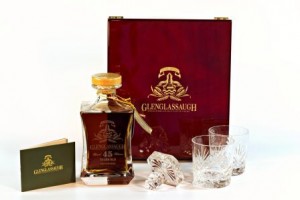 I had this first in Portsoy with the man himself, Stuart Nickerson. I loved and scored it (see here), but didn’t take proper notes. So here they come: This one is spicier and more tannic (in a good way) than the others. This dram is also more mineral and powerful, it is the deepest in terms of wood, fruit (bright and dark) and character. Wonderful apricot jam, morello cherries, marzipan, ginger bread and spice cake, a little black pepper and balsamic whiffs caress the nose. This cask could mature to perfection! Old cognacs come to mind when you nose it again, but the intense and inbelievably complex taste is like a rummy Christmas Cake with an old Vintage Port on the side. It is amazing how the brighter and fresher aromas coexist with the dark intense ones. Long finish! Maybe the second-best Glenglassaugh release so far (slightly trailing the 40/41 y.o.).