Some Single Malt connoisseurs don’t try Bourbon Whiskey by category at all, which makes them miss a world of taste. It’s not all Jim and Jack! Openly spoken, the diversity of Bourbon is much smaller than in Scotch Single Malt in general, but nevertheless there are huge quality differences and amazing Southern Belles from Kentucky not to be missed.

Let me mention some of the names you can’t go wrong with. You should try some small-batch-Bourbon by Jim Beam (yes!), e.g., Booker’s and Baker’s. I have also liked Wild Turkey’s Rare Breed, Old Pappy van Winkles Family Reserves (15, 20, 23 y.o.), the expensive George T. Stagg or the 18 y.o. Elijah Craig in the past. However, the two bottlings to be reviewed might even beat all of the above, I think. They are not THE best Bourbons around, but pretty rare and excellent examples. I had them head-to-head: 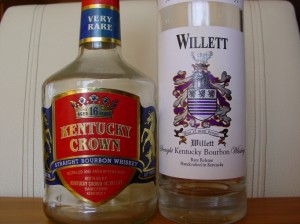 Willett might have produced (and nowadays fills) the world’s finest Bourbons. Every single bottling I had – even their Rye – was a stunner. But these sips can be quite tannic sometimes. Their small family-owned business focuses on old drams now, but their 6 y.o. single casks also rule and show many older bottlings who’s boss. The new stuff can keep up with their legends. Check out their stills and general history, it is very interesting. If you liked Olde St. Nick’s, Johnny Drum, Old Bardstown or Joshua Brooks bottlings from the old days (Willett/Evan Kulsveen), you sure will be into this one. This 14 y.o. nutty (hazelnut, coconut) and spicy (black and white pepper) bottling has a darker and less obtrusive wood note than the Kentucky Crown below but plays it close to the chest at first. Once you work at it, the whiskey reveals notes of pickles, cucumber, natural yoghurt, vanilla, whiffs of tropical fruit and hazelwood. On the palate it explodes to an enormous volume, really mouthfilling, complex and slightly adstringent. The finish becomes brighter and even nuttier in character and adds laurel and vanilla pod to the mix. Size matters!

This ugly bottle with its plastic screw cap (see picture above, or the one Jim holds on to) has been a rare myth and one of Jim Murray’s favourites. I tasted it with friends against many other Bourbons and it always came out on top or at least among the better ones.  As it is also made by Kentucky Bourbon Distillers, this is Willett as well, somehow. It is slightly darker than the 14 y.o. from above. The nose reminds me of Guatemalian rum a lot because of its immense sweetness and the vanilla/toffee combo. Gluey and spicy white oak wood transports tropical fruit, lemon and lime aromas, glaced pastries and Germknödel (vanilla-plum-dumpling) with great balance but is kept at bay despite 16 years of maturation in Dixie. On the palate, its sweet creaminess takes you in. It is less edgy than the wood would suggest at first, all the elements of the nose can be found again. Smooth but complex! The long and balanced finish is less on power than on finesse and leaves you wanting another glass. Great rummy Bourbon, folks!