On a Saturday night when people go out, we should taste accordingly – so I put together some odd ’nightlify‘ products as an interesting review for April fools tomorrow. I’m starting out with a pre-dinner vodka aged for ten years, the digestifs are a Caribbean/German rum liqueur and two flavoured rums from Mauritius.

In Poland it was a habit for some families to fill a small cask with vodka at the birth of a child and enjoy the matured distillate at the kid’s wedding or a special birthday at legal age. Good idea! Polmosages some of their Starka vodkas up to 50 years and allows us a totally new perspective on this drink. Their 10 y.o. is the entry-level into the world of aged vodka, so to speak. It starts with a very surprising nose that is very balanced and not vodka-like at all – at least what I connect with this spirit. I bet you that 97% of blind tasters would take this for a whisky. I also like the spice element (pepper) and the soft vanilla touch, which does not go overboard like in the ‚woodka‘ (another interesting oak-aged vodka from Germany). Lemon zest, whiffs of ginger, apples, dates, raisins and an aromatic freshness complete this enjoyable nose, which has improved with a little bottle age. In the taste it shows its true colors of vodka with raisins, ginger, fudge, hints of fruit and vanilla, not overly complex but good in its easy style with a medium-length finish. Nice Polish stuff, I must say. Thanks to Christine and Jörg for the sample. 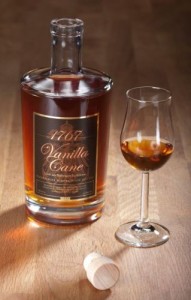 There are two versions of this with different abv. It is made in Flensburg, Germany (a city looking back on a long tradition of rum import), where 15 y.o. quality Caribbean rum is flavoured with natural Bourbon vanilla and diluted with glacier water, no additives, really natural and hand-made in all aspects. The makers and some connoisseurs claim that it is not meant for mixing – let’s see: Wow, indeed not artificial and full of harmony in the nose, more like a good rum that has big vanilla notes, like real vanilla pod to be precise. I am also getting tea with caramel sugar, traces of Amaretto almond liqueur, canned peaches and cheese cake with raisins, which means that it departs from rumminess with some time in the glass. I can picture it already accompanying creme brulee, Bavarian creme and stuff like that, even vanilla ice cream, Stracciatella or Malaga (rum-raisins). In terms of taste it is much sweeter than the nose would suggest, a bit too sweet for me, but maybe perfect with a cigar or in a tea – and it is a liqueur, so let’s not criticize sweetness (there is a law in Germany that forces you to add a certain big amount of sugar to call your product a liqueur). The intense and long finish adds whiffs of tobacco, coffee and marzipan to the aromas mentioned. Natural indeed, and drinkable on its own. Well done, Flensburg and thanks to Krissi (involuntarily providing me with a sample 😉 )! 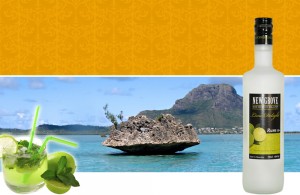 Mauritius born rum infused with hints of lime and spices, the base being the New Grove Plantation Rum. The nose reveals big lime aromas (slightly artificial and a bit like Sprite indeed, limoncello or toilet flush stone) and some white rum, that is pretty much it, but that’s what the label says. Chewing gum in the second row with traces of mint in a Mojito. The taste seems somewhat watered down with lime and mint in a rather neutral white rum. Nothing really happens here. Not fully convincing – but in a club, this is fine. 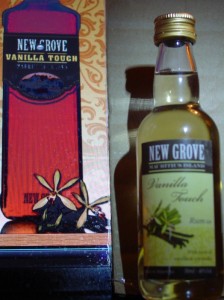 Aside from another flavoured rum called ‚Orange Bliss‘ by New Grove, this is a new third version with vanilla and citronella. Let’s nose this one: The dominating vanilla aromas are way more unnatural here (in comparison to the Vanilla Cane from above), like the vanilla puddings you can buy – okeyish, not bad, but also not very original. Citronella and whiffs of warming spices (aniseed and cinnamon) are the only other notes to be found, no magic of the rum happening. Oh my God, I tasted it, it is quite a mess with much more aniseed and alcohol that seems cheap, altogether really artificial. Only for mixing, but good barkeepers only use quality if they are good … so … mmmmh, I don’t know what to do with this one. Forgive me, Mauritius, I love your oak aged rum, but this stuff is pointless.