When it comes to Laphroaig Malt matured in sherry, I have mixed feelings. Some of these bottlings are really messed up by the wine – yet others are really enhanced in their complexity. For me it is important that the distillery character and the balance are still there. Let’s see if these two versions are winners in another head-to-head. You are in for a surprise, both are amazing: 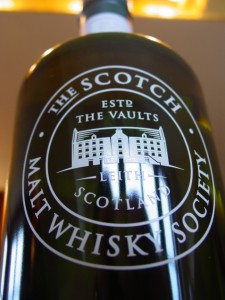 Holy cow! This reminds me of the sherried Signatory version from 1974, or even 1979 Talisker Cadenhead or the famous Brorageddon, all of these with their crazy flinty and sulphury aromas – I love this nose to death! Despite a lot of sherry influence, this isn’t flawed at all. Dark wood, cooked dark fruits (led by morello cherries and tons of baked plums wrapped in bacon), tobacco, pepper, freshly ground coffee, nougat and anything good that is dark can be found. I refuse to destroy this miracle by tearing it apart. Oh my God, it tastes like it noses with that good sulphur-, iodine- and peat action going on. Fabulous and close to perfect, also in the finish! Time travel? I kid you not when I say that this is probably one of the finest young whiskies I had in a very long time. This Monster-Laphroaig is a show stopper and today’s headliner. Encore! Get a bottle of this, it might become legendary. 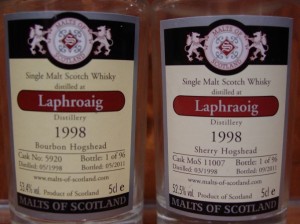 Bottle on the right (find the typo!)

Comment: Quite hard for this one with such an opponent in a head-to-head – but it can hold its own! Again, much fuller than the recent Bourbon Cask versions without losing its balance or the wonderful distillery character (some Laphs are becoming too dominated by the Sherry or turn ‚blue-cheese-fungi-like‘ in sherry casks – as mentioned above). It is fresh, spicy (pepper, chili) and herbal (camphor), but also retains lemon and lime notes. The sherry is totally unobtrusive but clearly there and paints impressionist dots of distant dark fruits on the colourful canvas of this bottling. Coffee whiffs, minerality and chalk make it complete. The taste is equally as wonderful as the nose and a classic young Laphroaig from a less active sherry cask.