From out of nowhere, great Lowland whisky turned up from closed Littlemill. What a gift. Most of these drams have succeeded so far and quickly sold out. Although I prefer the sherried versions a bit more, most releases are highly complex and unusual in their profile. Here are two other examples that you should seek out. 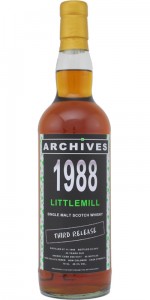 Comment: Close to the Whisky-Fässle version, but a bit less elegant at first (please compare my nitpicking here), however after a while it becomes just as nice. The same whisky (look at the numbers …)? Obvious sherry influence, super combo of dark and bright fruitiness, big sandalwood, a little peat and moss, discrete vanilla, altogether great from the start with intensity – an old  Macallan-like moment just as in the one from Whisky-Fässle (sweet maltiness, morello cherries, discrete raisins, earthy notes, orange zest and fine cigar). Later, whiffs of cinnamon, plums and berries join in, a high class malt with impeccable balance, no doubt that this stands out from so many others in the whisky ocean. It tastes as great as it noses and is again comparable to the Whisky-Fässle release in profile, but a tiny bit less deep in my memory – but it might as well be identical with a little treatment and time. Only few know … and who cares, I wouldn’t mind having more bottles of such quality. 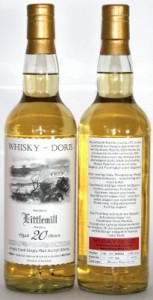 Comment: Quite some oak and tannin (a tad too much for the subtlety of this dram), dry maltiness, sawdust and alcohol, loads of licorice, vanilla, dried flowers, freshly cut grass, then some fruits (pineapple, watermelon, grapefruit, kiwi, gooseberries, tangerines, lemon dash, peaches), orange zest, traces of coconut and macadamia. On the palate, it convinces me much more with an explosion of fruit, vanilla, licorice  and hay which counter the oak well until the tannics and the dry malt win over in the finish. Water is recommended as it tones down the oak and puts more weight on the fruit. As expected, another nice Littlemill. Where have you been in recent years?